Looking for a living place

Try clicking the button below.

In the first phase of residential development in Thailand, the government established the Housing Division, the Housing Office, the Government Housing Bank and the Bangkok Slum Improvement Office, and all of which aimed to resolve a shortage of residences for people, which the number had been increasing every year. However, this action was still unable to meet the public demand thoroughly because each of these organizations belonged to different jurisdictions. Therefore, in order to solve this problem of housing shortage, the government has established the National Housing Authority to directly serve the residential development as well as transferred some relevant duties and personnel to this organization. The National Housing Authority (NHA) is a state enterprise attached to the Ministry of Social Development and Human Security. It was established on February 12, 1973 in compliance with the National Executive Decree No. 316. It currently operates under the National Housing Authority Act (B.E. 2537), with the objectives to provide housing for low and middle income earners, to provide financial assistance to those who need to have their own housing, to deal with the business of building construction and land acquisition, and to upgrade, demolish or relocate slums in order to assist people in achieving better living, social and economic conditions. 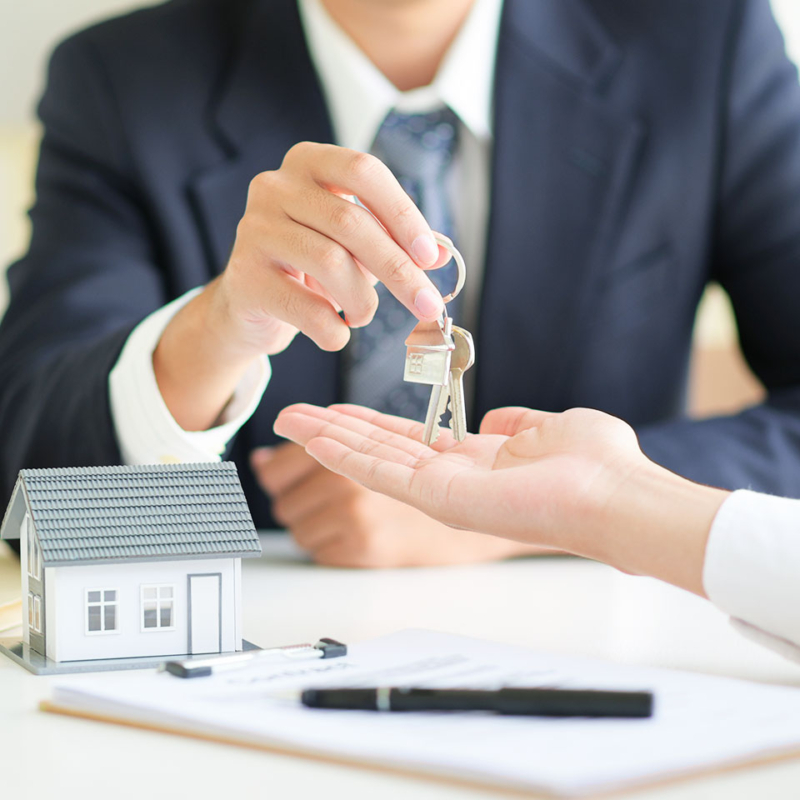 Performance Over The Past Thirty-Four Years

From 1972 until 2006 the NHA has carried out housing development work totaling 544,686 housing units. Almost seventy-five per cent of those were housing development projects in Bangkok and its vicinities and the remaining 25.82 per cent were in the provinces. Details are shown below.

Project for Conversion of Assets into Capital

1. Development of housing information systems. Two housing database systems have been developed through using the Geographic Information System (GIS). The Housing Database System of the Urban Poor and Slums consists of information on each community and a map of its location, while the Database System of Public Housing Projects shows the location of each housing unit to enable community management. The housing information system is also applied to help solve housing problems for the poor who are registered in the project of integrated solution to social and poverty problems.

2. Organizing of training courses on housing finance in order to give and support knowledge of housing finance to personnel in and outside the NHA. This enables participants to apply knowledge gained from the training to provide financial services to low income people. There were four classes where 166 participants were trained.

3. Project for promoting local administrative organizations’ capability for formulating plans for urban housing development and locallevel plans for preventing and solving slums problems. This was designed to enhance knowledge and understanding of the process for formulating integrated housing development plans at the local level. The project was launched in 2004. Currently, there are local administrative organizations from twenty-two provinces participating in the project. It is expected to have representatives from seventy-six provinces trained by year 2011.

4. The project for housing research and development studies aims to develop bodies of knowledge, innovation and new technologies as well as to conduct experimental projects which bring about applicable knowledge to help reduce the cost of housing construction for the urban and rural poor. The following are sample projects. – The project for studying housing indicators aims to define the current housing situation and to create an early warning system for property crises in the country. -The project for studying rules and regulations for housing development aims to identify therules and regulations obstructing housing development and to specify solutions for the problems.

– The project for studying low-income housing standards is designed to provide a better quality of life for residents.

Project for research and study of integrated development for local residences with the selfsufficiency concept.

Project for studying rural housing development in the northeastern region.

Providing assistance on housing development to people requires data and technical knowledge from housing studies in order to formulate policy and planning for the national housing development strategy and to enhance housing management, which brings about a better quality of life and living conditions for people. The NHA has cooperated with the government of The Netherlands in housing studies development since 1982. Since then there has been considerable research undertaken and numerous housing study development projects. These have encouraged international cooperation and technical training course organization.

Project for Improving the Environment and Life Quality of Community Members

The NHA is not only responsible for development of housingfor low-income people, but also for improvement of the quality of life of community members. The communities are to receive physical, social and economic development that would help engender good-living communities. Moreover, the NHA has implemented the Project of Utilizing Effective Microorganism (EM) for Environment Protection. Community residents are encouraged to use EM for household and agricultural activities. It was found that using EM can help save almost fifty percent of the total budget for waste water treatment. Around 200,000 community members have been trained in the project. The NHA plans to disseminate knowledge on using EM to all communities throughout the country.

In addition to encouraging people’s awareness of environmental improvement and protection, the NHA has implemented the White Community – Narcotics-Free Project in order to campaign for the prevention and resistance of narcotics use. The campaign consists of various activities such as training community leaders, training youth’s parents, arranging sport competitions, organizing youth relation activities, painting contests and building sports yards. All these activities are arranged with the major aim to encourage youth to make positive use of their free time instead of consuming narcotics.

The NHA also pays considerable attention to improvement of the quality of life for the elderly Accordingly, a research survey on socio-economic condition and attitudes of the urban elderly was conducted. Pilot projects for the study were implemented in four provinces — Bangkok, Chiang Mai, Nakhon Ratchasima and Nakhon Si Thammarat. In adition, the Housing Project for The Elderly was founded on an area of fifteen rai in Amphoe Pak Priew, Chachoengsao province. This project was initiated with the idea of allowing the elderly to take a fuller part in society. It would enhance their quality of life and residential security. In addition, the NHA is promoting the establishment of Learning Centers for Taking Care of The Elderly in all large communities throughout the country. A pilot project of a nursing home for the elderly was implemented in Bang Plee New Town on an area of two rai with a floor area of around two thousand square meters. There will be teaching and learning activities to increase knowledge and understanding of taking care of the elderly to those who have to nurse them.

Problems of poverty and housing still exist. The Baan Eua-Arthorn Project was initiated to help solve this problem. Moreover, the National Directing Center to Fight for Defeating Poverty appointed the NHA as the secretary of the Working Group for Solving Housing Problems. The main tasks of the Working Group are to define guidelines and procedures for provision of housing the poor, to facilitate local organizations in finding solutions to housing problems, and to encourage cooperation among concerned agencies to achieve good housing management and budget allocation. It is expected that the Baan Eua-Arthorn Project would help providing housing for sixty per cent of the poor who had registered, a total of 211,964 cases. As of September 2006, the total number of those who were allocated to the right owners was 98,364.

According to the Act on Determining Plans and Process of Decentralization to Local Government Organization (B.E.2542), the NHA is to transfer responsibility for public service provision and quality of life development to the local government organization in each project area after the completion of construction. In order to enhance the readiness of local government organizations to assume this task, the NHA cooperated with the Faculty of Sociology and Anthropology at Thammasat University to organize workshops for local government authorities. In the first phase ten provinces participated in the program. They are Nakhon Pathom Province, Prachin Buri Province, Phra Nakhon Si Ayutthaya Province, Khon Kaen Province, Buri Ram Province, Mukdahan Province, Surin Province, Ubon Ratchathani Province, Si Sa Ket Province, and Nong Bua Lam Phu Province. The NHA has a plan to implement this program in all project areas.

Baan Eua-Arthorn, one of the NHA’squality housing development projects, has been developed with a keen awareness of the significance of the institution of family and in the hope that this project would serve government policy in providing standard residential quarters for the target groups. These include the disadvantaged, low-income earners, junior civil servants and government employees, all with not more than 22,000 baht / month income per family (income as of 2006 – present). Project implementation began in 2003. The government provides subsidies in the amount of eighty thousand baht per unit for the cost of construction of public utilities. As of December 2006, there are seventy-two completed projects encompassing 65,293 housing units in total. From February 2003 to November 2006 there were 1,075,608 applicants on the list to become Baan Eua-Arthorn Project residents. The required residential units were allocated through a process of drawing lots. Those who missed the chance to have a right in their first-priority selected project are still eligible for another project that they specified in their applications. There is no need for them to reapply. However, they have to reconfirm their right. The NHA has already allocated 252 projects containing 323,474 units to owners. Of this total, 158,726 units are already signed and contracted. Out of those, there are 26,780 completed units that have already been delivered to their occupants. After the completion of construction and occupation by the residents, the NHA has to be responsible for community management in order to improve the quality of life of community members. The Eua-Arthorn culture has been crafted as a tool to encourage the community to have a “caring-for-each other” culture in four distinct areas: physical culture, economic culture, service culture and social culture. These ideals should create a livable community consisting of residents who help, care for and respect each other’s rights.

Creation of A Neighborly Society

The Strategy of Neighborly Thai Society is one of the three approaches set by the Ministry of Social Development and Human Security to encourage all parties to perform good things for His Majesty the King. To comply with that, the NHA has carried out the project of Neighborly Thai Society with the aim to promote and campaign with community members, people outside the communities, NHA personnel, government officers of the Ministry of Social Development and Human Security, alliance groups, and other related parties to help the victims of disasters and the less-fortunate through the donation of money and assets. The NHA envisions that this activity helps to strengthen community harmony and unity.